Signup to get your free copy of Executive Truth

Signup to get your free copy of Executive Truth

Meet Justin Truth, one of the most evil men to ever walk the planet. Behind his charismatic smile and bespoke suits lurks a history of deceit, violence, and murder. As one of America’s most prolific serial killers, his evil hasn’t gone unnoticed, and there are those who have seen through his well-constructed camouflage of lies. Yet, the more they uncover, the more dangerous he becomes.

Are those seeking the truth ready to pay the ultimate price to bring him to justice?

Dive into the next evolution of the thriller genre with this unique twisted series that allows you delve into the mind of a dangerous psychopath. What reviewers are calling ‘addictive reading’, The Truth Files is packed with nail-biting twists, page turning intrigue, and unforgettable characters.

What readers are saying about this unique series:

This is a must read…If I could give it ten stars I would. Once you start you won’t want to put it down. You can feel the emotions the characters are going through.
Review on Amazon

This book is a true page turner. A true psychological thriller. I have to read the next book immediately, due to the fact Karl William Fleet made it impossible not to. If you like sick and crazy I recommend you read this series.
Review on Amazon

I love the stories within the stories which is a great way to flesh out all the different plots. Equally fascinating is the sheer evilness of Justin and how he maneuvers through life wrecking people along the way.
Review on Amazon

I loved his style of writing. The stories flow along well and keep you interested and you don’t want to stop reading. I think everyone should read his books!
Review on Amazon

Let’s begin with what an accomplished author Karl Fleet is. Anyone who can begin from page one and go through to the end page wrenching and wrecking my emotions the way this book did, and yet had me turning page after page to figure out what the main character Justin Truth does next.
Review on Amazon

A highly enjoyable fast-paced thriller that kept me glued all the way. The main character, Justin Truth, creates a unique sense of love/hate as he breaks all the rules to get ahead in the corporate game. The book is full of unpredictable twists and a totally unexpected ending. Great characters, brilliant plot and solid writing kept me on the edge of my seat throughout.
Review on Amazon

So addictive! Left me wanting to find out more about Justin Truth and what he’d get up to next!
Review on Amazon

I have read all 3 of the “Truth” books now and I have definitely found a new author. Justin Truth is a sociopath that you absolutely hate. I like knowing he is the bad guy and I’m always wondering just what other awful things he can do. Just when I think he can’t top himself he does. The author manages to grab you from the first page all the way to the end. The books do leave you hanging at the end so you must read the next one. This was okay until I finished the third one and wanted to read the next one. If you like a book about a twisted madman then these books are for you!
Review on Amazon

OMG! I have read all 3 books in this series one after the other! And if there were another, I would rush over to Amazon to download it pronto!
Review on Amazon

I could not put this down even when I was horrified by it. Amazing story.
Review on Amazon


Karl loves storytelling. From a young age, when not watching James Bond films, Karl would binge read comics. The British anthology 2000Ad became a staple diet of his comic addiction.

Having to grow up, he luckily landed a job working in advertising as a copywriter. While writing the occasional award winning ad, Karl also dabbled in short films. One of his films, Signs, hit a sweet spot with people and has been viewed over 10 million times on YouTube.

Karl’s passion for storytelling led him down an unlikely path: professional wrestling. As his alter ego, Curt Chaos, he became the New Zealand Heavyweight Champion and toured the country defending his title for over a year.

Then one summer day, Karl had a crazy idea (he seems to have lots of them). He wanted to write a series of books. But to make it a little different, he wanted to make the villain the central character. To create Justin Truth.

Another of his crazy ideas was to write the first three books in the series, Corporate Truth, Criminal Truth and Fractured Truth, at the same time. To learn how to write better, Karl went back to University and earned a master’s in creative writing. He then thought that since he grew up in New Zealand and Justin Truth is based in America, he should spend some time in the States. So, Karl threw a backpack over his shoulder, grabbed his laptop and travelled America for a year while finishing the books.

In 2018, he launched the first three Justin Truth novels and followed them up with a novella. He is currently working on more Justin Truth tales to add to the series, as well as creating other original novels. 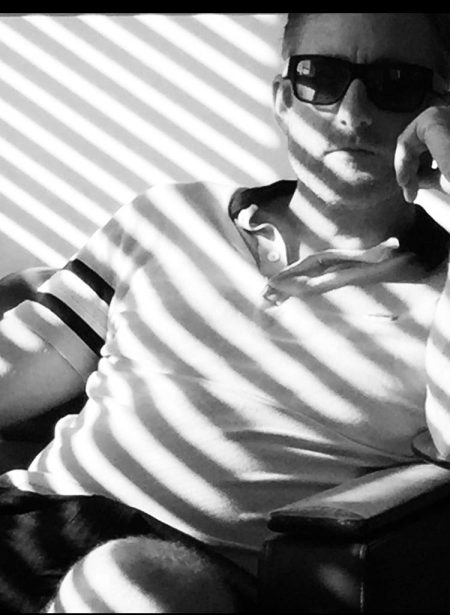